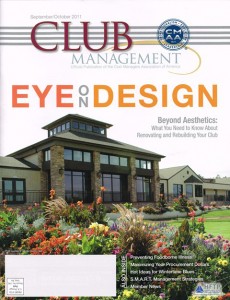 “Once I knew it was more than one or two people getting sick, I reckoned we had a problem on our hands,” says Scupham, general manager of the Glencoe, IL-based club. “I called the health department myself and we voluntarily shut the club down.”

With club operations suspended, Scupham and the local health department began investigating the cause of the outbreak (later identified as a salmonella) and communicating with members about what was happening. Though it took 12 days to open back up again, Scupham says he’s pleased with how the crisis was handled overall.

A foodborne illness outbreak may rank high among a club manager’s worst nightmare, but statistics show that the reality is that a club is more likely to experience one than not. Experts agree that from communicating with members to cooperating with officials, transparency is critical to successfully managing the crisis.

According to the Atlanta-based Centers for Disease Control, 48 million people will suffer a foodborne illness this year. That means that out of every eight-top table a club has, one of those people will be sick once this year, says Alan Achatz, CCM, CHE, president of Buffalo, NY-based Club Safety Solutions LLC.
“For club managers, when it comes to food safety and foodborne illness, the question is not if it’s going to happen, it’s when and where,” Achatz says.

With that inevitability in mind, insiders say the most important thing clubs can do is be ready to communicate with members quickly and openly.

In Scupham’s case, the club sent out a mass email to members.

“Once we confirmed it, we let the members know immediately and advised people to see their doctor if they were ill and had eaten at the club between certain dates,” he says. “Then we followed up with each individual who fell ill to find out when they were there and what they had eaten.” The club continued to email members daily for several days about the status of the investigation and what the club was doing to fix the problem.

“Make sure you’re being honest and open with them,” she says.  “Tell them what you know and what you’re doing, and assure them that their health is your first priority.”

Grooters adds that the same transparency is helpful when dealing with the food safety regulators who investigate the outbreak. She says one common mistake many kitchens make is disposing of food before inspectors arrive.

“The health department can match implicated food items through epidemiological studies, so if you have an outbreak, don’t throw away food before the inspectors can come and test it,” she says. “That can be especially helpful if the outbreak is not food-handler associated, but rather stems from a specific product.”

Grooters emphasizes that regulators can be a real asset to club management, not only in managing a current outbreak, but also in helping make sure it doesn’t happen again.

Scupham learned that lesson first-hand, as he worked with inspectors through the outbreak that he says sickened 75 members and 18 employees overall.

“We did exactly what they told us to do,” he says. “We were in constant contact with the department of public safety, telling them what we knew and what we were doing. That back-and-forth communication was very helpful.”

Grooters applauds Scupham and his board’s decision to shut down during the outbreak, but says clubs can also remain open if they take certain precautions, including serving only certain foods or outsourcing foodservice operations altogether.

“Consider hiring a caterer while you’re going through an outbreak, or only serve food that’s hot enough that you’ve killed any bacteria or virus potential,” she says, singling out items such as baked lasagna or pizza. “If you’re not going to shut down, serve only food you know is safe.”

While a quick and smart reaction is critical to overcoming an outbreak, ultimately, insiders agree that being prepared can make all the difference.

According to Achatz, a key element of that preparation is to be ready when the phones start ringing.

“Train your receptionist or whoever will take those first calls to ask the right questions and provide the right information,” he says. “It’s a good idea to have a checklist or questionnaire on hand so they can ask the caller things like what they ate, when they ate and with whom they ate.”

Achatz also recommends that club officials educate themselves about the main culprits that cause foodborne illness – including their symptoms and incubation times – so they understand what they’re up against.

“The more you know, the better off you’ll be,” he says. “The bottom line is it’s going to happen, and preparation is what separates the clubs that handle it well from those that don’t.”